How to Secure French Doors

French doors are one of the weakest security points in your home due to two individual doors meeting in the middle. When they are not properly locked, or the locks provided during the installation have not been modified, these doors can be made to easily swing open even when the deadbolt and door lever have been locked.

As a door lock manufacturer, we help people secure their french doors often, and we have found the following ways to be the most effective.

Install a screw that prevents unlocking of passive door. This is easy, affordable, and very effective.

Install security film to protect the glass from being broken out.

For maximum door security, install new locks that join both sides of the door and secure them in place. 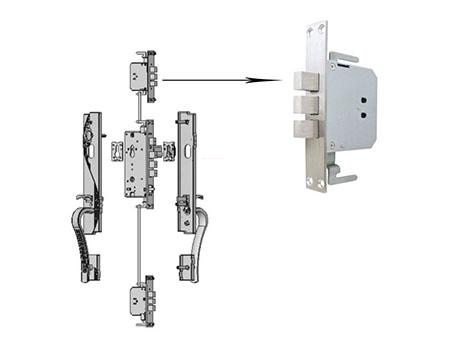 French doors suffer from the same security weaknesses as any exterior door in the home. We have written an article on How to Reinforce an Entry Door in 6 Easy Steps. Everything in that article applies here as well.

But French Doors also have specific security concerns that make them more vulnerable to burglary than a standard door. Once you’ve addressed the specific double-door security weaknesses here, take a look at the above article to make sure that all your doors are reinforced.

The specific security weakness of a french door comes from the fact that the two doors meet in the middle. Because the passive side of the door is seldom used, it is secured into the top and bottom of the door frame. Most commonly this is done using flush bolts installed in the edge of the passive door.

As long as the passive door remains secure to the door’s frame, then there should be no problem.

However, the passive side of the door can easily be unlocked. There are numerous YouTube videos showing a variety of techniques to unlock a double door. All it really takes is a thin screwdriver, drywall hammer, or even a heavy coat hanger to bypass the metal door locks.

If you position any thin, rigid device into the seam between two doors, you can use it to latch the flush bolt, and then slide it to the unlocked position. It takes just a few seconds to open double doors using this technique.

Important: Your secured french door can be unlocked, in just a few seconds, with no visible signs of forced entry, using the above method.

How to Secure French Doors – Quick and Easy Solution

We’ll discuss a couple of ways to secure your french door, but this technique is the simplest, cheapest and easiest. It won’t address any other security weakness of the double door (such as the glass), but it will prevent someone from getting into your french doors undetected as we’ve just discussed. All it takes to prevent this bypass, is a single screw.

Using a screw to lock the flush bolt.

The passive side of the door is very seldom used. Most homeowners only unlock it and use it when they are trying to get something very large into or out of the house.

Keeping that in mind, we recommend screwing screws into each flush bolt so that they cannot be slid open until the screws are removed.

To do this, slide the flush bolt into the door’s frame, securing the door. Then screw a small screw into the bottom of the flush bolt so that the bolt can not be opened until the screw is removed.

When I have customers with large valuables in the home, and french doors, we have often increase the security of the french door to the highest level possible. To do this, we:

Install a commercial grade double sided deadbolt into the active side of the door, or alternatively

Install a double side, high security deadbolt into the active side of the french door.

Add one-side half deadbolts to the top and bottom of each door.

The Mul-t-lock has a feature here that is ideal for double doors. In a Mul-t-lock lock, there is a ball bearing in the bolt that will secure and lock into the strike of the other door. This makes the two doors very difficult to pull apart!

If you are investing in a Mul-t-Lock for a double french door, you do not want to get one with a thumb turn on the inside of the home. Buy a double cylinder deadbolt that takes a key on both sides. This way, if the glass is broken out, the deadbolt cannot be opened using the thumb turn.